Zane was inducted “Officier” of the Legion of Honor on June 6, 2009, the 65th anniversary of D-Day. The ceremony took place at the American Cemetery in the presence of Presidents Sarkozy and Obama, Prince Charles and the Prime Ministers of the UK and Canada. 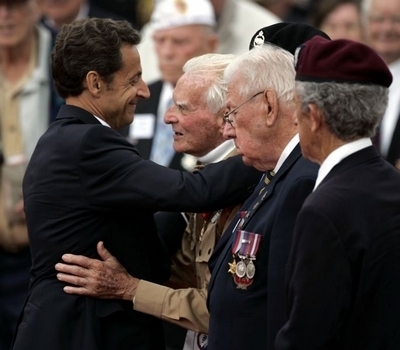 Zane Schlemmer receives hug from President Sarkozy
after receiving his Legion of Honor medal at the
American Cemetery, Normandy, June 6, 2009

On D-Day Zane Schlemmer was a 19-year-old tech sergeant of the 508 PIR, 82nd Airborne Division. He was a forward observer for a 81 mm Mortar Squad and at 1.30 am on June 6, 1944 he landed in an orchard in Picauville, close to Château de Bernaville. This chateau in Picauville was the  headquarters of German General Falley and his 91st Airborne Defense Division. Zane stayed in combat until July the 3d 1944 when he was wounded in the battle of La Haye du Puits. 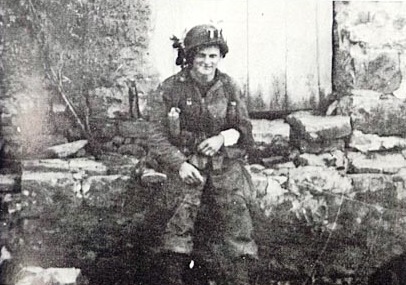 The 508th PIR, which had served with the 82nd Airborne Division since D-Day, was selected by SHAEF to guard its HQ in Frankfurt. Zane served as part of this honor guard of General Dwight Eisenhower. 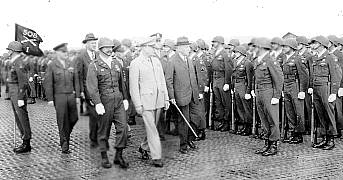 In 1977, the French Mayor of Picauville placed a marker and a bronze plaque in the field where Schlemmer had landed on D-Day and named an adjacent road “rue Zane Schlemmer” in his honor. That same year Zane posed with Jack Schlegel, another 82nd Airborne veteran on the steps of chateau de Bernaville with the giant Nazi flag captured on D-Day from the car of the slain German General Falley.

In 2009, president Barack Obama signaled out Zane Schlemmer in his speech at the American Cemetery, addressing the WWII veterans and the world: “your story was written by men like Zane Schlemmer of the 82nd Airborne, who parachuted into a dark march, far from his objective and his men. Lost and alone, he still managed to fight his way through the gunfire and helped liberate the town in which he landed – a town where a street now bears his name.” 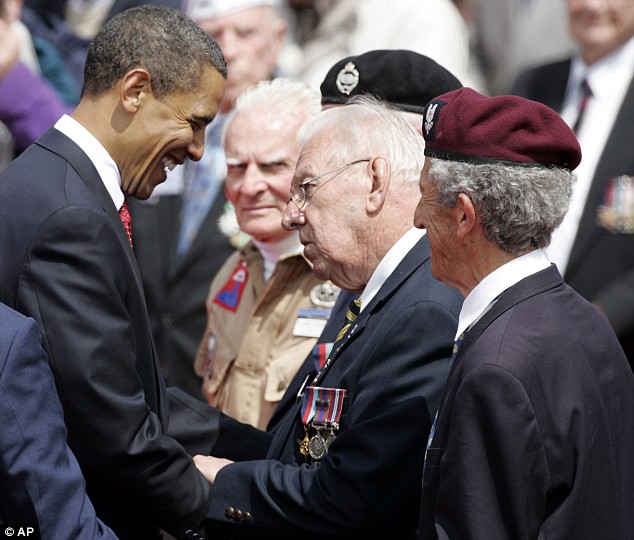 President Obama congratulating the veterans at
the American Cemetery, June 6, 2009

Zane Schlemmer returned many times to Normandy and in particular Picauville, where had landed on D-Day. We had the privilege to call him our friend. 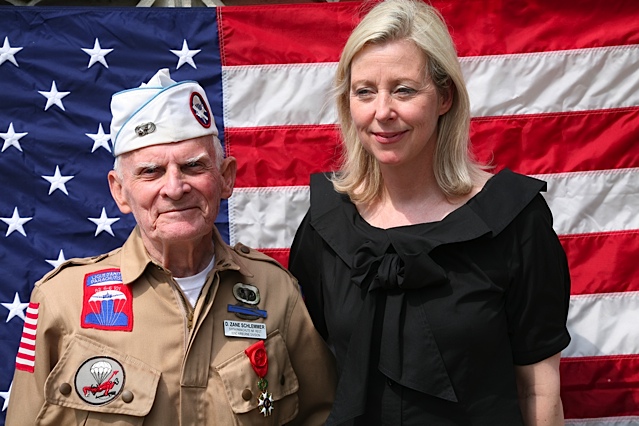 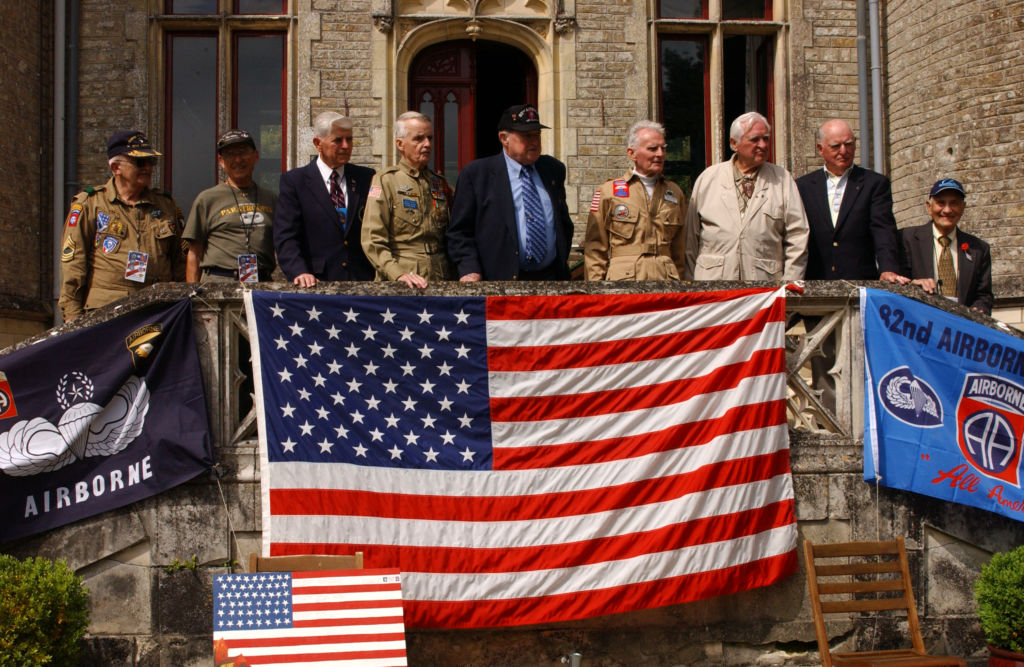 During the 70th anniversary of the attack on Pearl Harbor, December 7, 1941, Zane served as the “Honorary Guard” to Dorothea de La Houssaye. After the commemoration ceremony they were invited to a private wreath laying ceremony on the Arizona Memorial. Zane and Dorothea presented a wreath on behalf of Sainte Mere Eglise and Utah Beach. 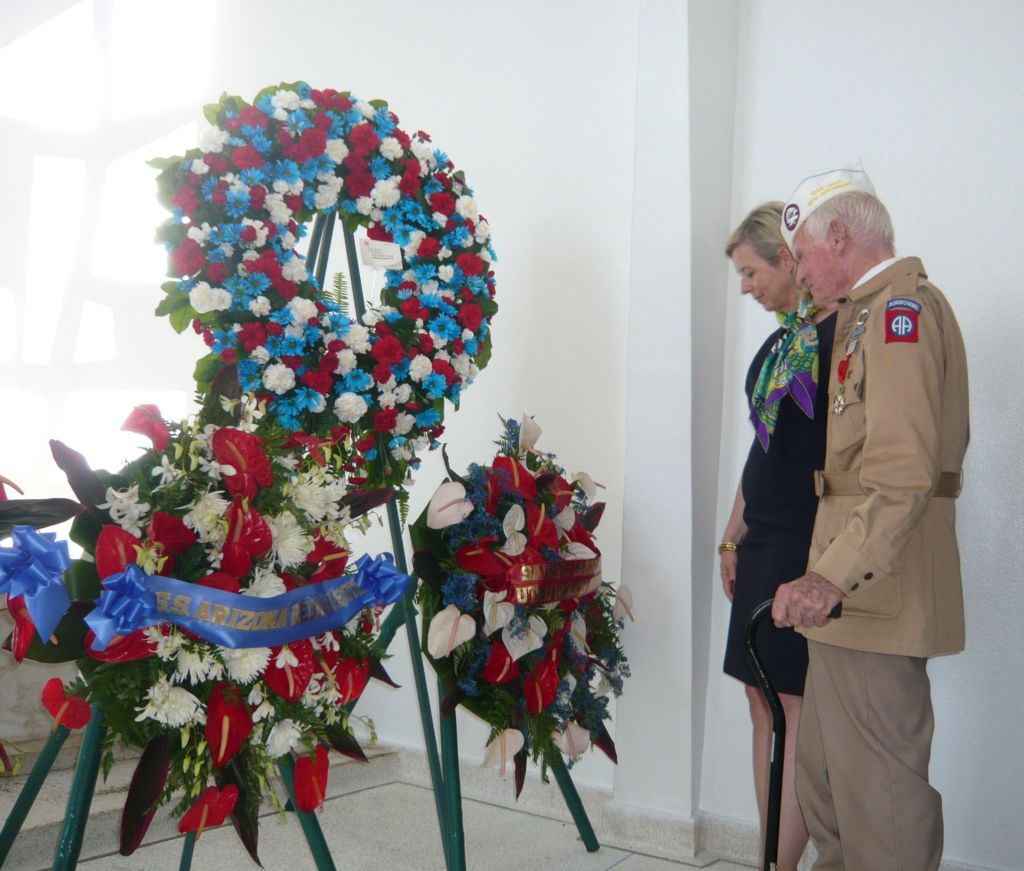 Zane Schlemmer was not only a decorated soldier who put his life on the line for his country but later devoted thousands of hours volunteering on behalf of veterans at the military cemetery in Kaneohe in Hawaii. Zane helped find visitors find the graves of relatives and handed out information or even manned the phone.

Zane at the Hawaii State Veterans Cemetery in 2010

Zane still fitted into his D-Day uniform and proudly maintained his original jump boots with spit and shine. Zane passed away in 2013 and is sorely missed. Who will now call Dorothea “Princess”? 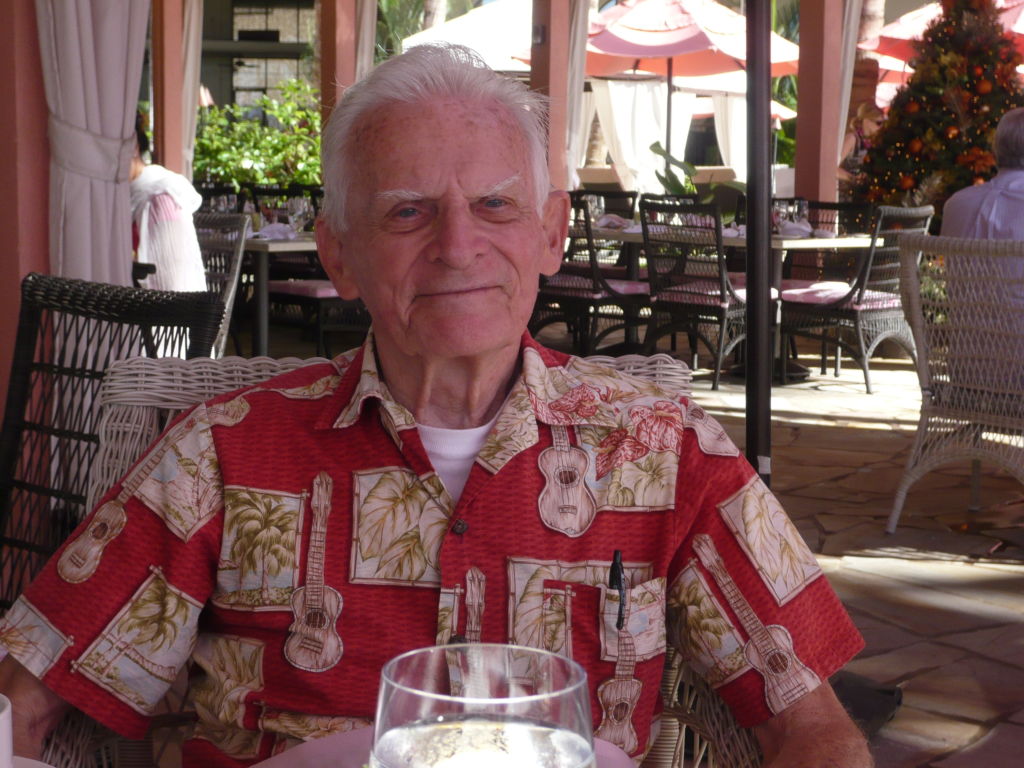 Zane in one of his famous “Hawaiian” shirts